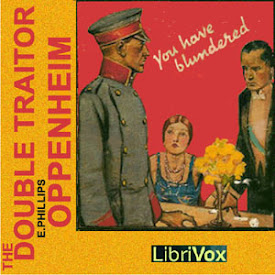 The setting is the years prior to the outbreak of World War I. It is a time when Germany is outwardly preparing for war but Britain continues to believe it is invincible and that no one would challenge her. A vast German spy network flourishes in England, often in plain view. The main character is Francis Norgate, an aspiring British diplomat who falls in disfavor with his superiors for defending a woman while stationed in Berlin. The resulting scandal causes Norgate to be recalled. On the way home, he meets a German gentleman, Selingman, who claims to be a crockery salesman. But, Selingman is not what he appears to be. Disillusioned by the English government, Norgate allows himself to be recruited by Selingman. (Summary by Tom Weiss) (7 hr 13 min)

A fascinating story covering several months leading up to WW1 from the viewpoint of upper British and European attitudes towards coming war. Such an important time affecting the world even now, yet rarely spoken about. I sure didnt hear anything about it in school, so have always been confused re: early 20th century Europe and UK history other than there were wars.

As always well read and anther great read in The Double Traitor. The POV taken of the lead in this story is quite unique,intriguing and well complemented with a romance, in the backdrop of upper British Society on the onset of WWI... Thanks!

One of the Best

one of my favorite readers

This will lift one's patriotism for ones country that is fighting for the freedom of others.

Very good yarn read in a clear and distinct manner. To be recommended.