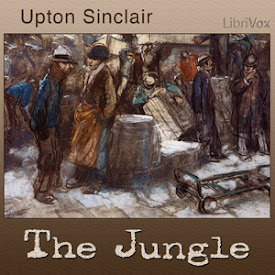 It is the end of the 19th century. Like thousands of others, the Rudkus family has emigrated from Lithuania to America in search of a better life. As they settle into the Packingtown neighborhood of Chicago, they find their dreams are unlikely to be realized. In fact, just the opposite is quite likely to occur. Jurgis, the main character of the novel, has brought his father Antanas, his fiancée Ona, her stepmother Teta Elzbieta, Teta Elzbieta's brother Jonas and her six children, and Ona's cousin Marija Berczynskas along. The family, naïve to the ways of Chicago, quickly falls prey to con men and makes a series of bad decisions that lead them into wretched poverty and terrible living conditions. All are forced to find jobs in dismal working conditions for their very survival. Jurgis, broken and discouraged, eventually finds solace in the American Socialist movement.

This novel was written during a period in American history when “Trusts” were formed by multiple corporations to establish monopolies that stifled competition and fixed prices. Unthinkable working conditions and unfair business practices were the norm. The Jungle’s author, Upton Sinclair, was an ardent Socialist of the time. Sinclair was commissioned by the “Appeal To Reason”, a Socialist journal of the period, to write a fictional expose on the working conditions of the immigrant laborers in the meat packing industry in Chicago. Going undercover, Sinclair spent seven weeks inside the meatpacking plants gathering details for his novel.

The Reader wishes to gratefully acknowledge the assistance, and patience, of Professor Giedrius Subacius (University of Illinois) and the folks at Lituanus for their invaluable support as I struggled with Lithuanian pronunciations. Truly, this audio book would have been far more difficult, and far less authentic, without their help.

This is great novel. It's a condemnation of the working conditions endured a hundred years ago before the advent of unions, worker's rights and decent labor legislation. It scares me to think that it might also be a vision of the future the way things have been going lately. When listening to this, remember, even though it's fiction, it's based entirely on fact. With that in mind be prepared for a gut wrenching emotional experience as Tom Weiss's marvelous, top-notch job with the reading really brings it all to life.

this audio book makes you so thankful for what you have. should be required reading for anyone saying that we shouldn't regulate companies, that they can regulate themeslves in a fair and humane manner. It won't work like that, any more than pure communism or pure socialism works. You need a mix to create a humane and stable country.

This was a very interesting look at the inside life of a poor man and reviled a lot about society and corporation at the time. The reader is great, he has a smooth voice that easy to listen to and matches the story very well.

Great experience with this audio book. Was initially skeptical of how I'd take to the narrator's presentation, but I thought that Tom's careful delivery yielded itself well to the often grim details of the novel. Thankful to all those involved for the opportunity to learn from this influential work!

A different way to enjoy The Jungle

The Jungle has been one of my favorite novels for the last 13 years and this is the first time I have had the oppurtunity to enjoy an audio version. Weiss's reading is quite well done. Very good!

Too bad Socialist gov. model ended up as corrupt as having kings or Capitalism

No social plan basic premise works equally 100% of the time for 100% of the population. But I am glad this book was written and the horrid conditions were exposed to people at that time and at that time the most influential persons chose to act effectively. But, those same people's grand children are compliantly allowing the same situations to repeat them selves. Why are we allowing multinational Corporations to buy, bribe, or intimidate our elected office holders. Why do we condone these same entities to charge us equally for that "3% water added by weight" ? Check any pre packaged container of factory packed meat and if you look at the fine print or * marked small explanation else where noted it tells you they added water into the meat. The meat is labeled as to what country it was packaged in, but, that does not tell you any where where it was born and raised in, much less where that water added came from. 100+ years of progress sold out completely in under 20 years. With all the food and drug recalls for contaminated in the past 20 years I would think we should already be able to "buy a vowel !!!"

This is indeed an epic tale of struggle and the daily fight that thousands of workers undertook simply to get a toe hold on life's slippery slope to ruin. Clearly, this is also an important book in terms of its impact upon food safety and work conditions in the US in the early 1900s, leading as it did to the ultimate formation of the FDA. It is a harrowing tale for the main character Jurgis and his family who encounter a series of calamities. My only criticism of this book is that we are left in the end not knowing the fate of Jurgis. Having invested 27 chapters into his life, the author devotes the final 3 chapters to summarising the benefits of socialism. Jurgis' seems forgotten and his life feels a little unresolved. Nevertheless, this book is certainly a very worthwhile listen. Chapeau as always to Tom Weiss for his wonderful narration.

Glad I finally got to listen to Upton Sinclair's Magnum Opus. Still relevant today with the exploitation of workers especially in the gig economy. Also many States in the US still have no minimum wage and there is still a long way to go in terms of the rights of people to universal health care and racial equality. Enjoyed Tom Weiss' interpretation, especially his heroic attempt at the Dutch midwife! Couple of observations. In light of the passage of 120 years, Sinclair's optimism about a socialist future looks a little hollow, and I wonder if the racist undertones when discussing the strike breakers were supposed to be the thoughts of our protagonist, or Sinclair's himself. You could argue that if the latter, it could just be a reflection of contemporary attitudes, but if so, seems to be in conflict with his professed socialist ideals.