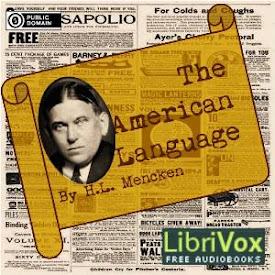 "It was part of my daily work, for a good many years, to read the principal English newspapers and reviews; it has been part of my work, all the time, to read the more important English novels, essays, poetry and criticism. An American born and bred, I early noted, as everyone else in like case must note, certain salient differences between the English of England and the English of America as practically spoken and written—differences in vocabulary, in syntax, in the shades and habits of idiom, and even, coming to the common speech, in grammar. And I noted too, of course, partly during visits to England but more largely by a somewhat wide and intimate intercourse with English people in the United States, the obvious differences between English and American pronunciation and intonation. Greatly interested in these differences—some of them so great that they led me to seek exchanges of light with Englishmen—I looked for some work that would describe and account for them with a show of completeness, and perhaps depict the process of their origin. I soon found that no such work existed, either in England or in America—that the whole literature of the subject was astonishingly meagre and unsatisfactory." - Summary by Mencken (Preface) (15 hr 41 min)

Ch1 By Way of Introduction Pt 1The Diverging Streams

Ch1 By Way of Introduction Pt 2 The Academic Attitude

Ch1 By Way of Introduction Pt 5 The Characters of American

Ch1 By Way of Introduction Pt 6 The Materials of American

Ch2 The Beginnings of American Pt 1 In Colonial Days

Ch2 The Beginnings of American Pt 2 Sources of Early Americanisms

Ch3 The Period of Growth Pt 1 The New Nation

Ch3 The Period of Growth Pt 3 The Expanding Vocabulary

Ch6 The Common Speech Pt 1 Grammarians and Their Ways

Ch6 The Common Speech Pt 2 Spoken American As It Is

Ch6 The Common Speech Pt 6 The Noun and Adjective

Ch 7 Differences in Spelling Pt 3 The Influence of Webster

Ch9 Miscellanea Pt 3 The Future of the Language

Interesting for the language geeks

This book, written about 100 years ago, compares American English with British English. It is dense with information, but not too difficult to understand. (Just drowse through the word lists.) I was struck by the differences between the way words were pronounced in the early 1900s and the way they're pronounced now!